Zeus Iriopourosu is the 1st year captain of the Greek U-17 team. 1st year though he may be, he has more than enough presence to be the team captain, as he is trusted even by his senior teammates. Every word from his mouth expresses something of deep importance and is treated as such.

The man who rose to the top of the Greek tennis world at a young age. His serve holds the power to strike with lightning and is definitely not unmanangeable. He hates destructive tennis and prefers a showdown of pure skills.

He is very young looking Greek player with the same curly hair as his other teammates.

He has a commanding presence. Despite being only a first year high schooler, his teammates greatly respect him. Even Shiraishi was unsure whether he could defeat him or not. Shiraishi was so flustered at Zeus standing in front of him. Tanegashima saved Shiraishi's frozen state by taking on Zeus himself.

He does accept his losses graciously. He shook hands with Tanegashima with a smile when he lost.

He appears after the first Greek doubles team, Papadopoulos Evangelos and Thalatta Heracles, lose their match.

He is scheduled to play against Kuranosuke Shiraishi in singles 3 of the Group League round robin matches.

However, Tanegashima decides to step in for Shiraishi. Zeus quickly wins 5 games until Tanegashima started playing randomly and wins 7 games in a row.

Despite being a first year, he is seen to be equal to Tanegashima, the No.2 of Japan, who is also two years older than him. He quickly won 5 games straight. He lost against Tanegashima when Tanegashima started playing randomly.

Despite being a first year high schooler, he already has an impressive aura, as noted by Tanegashima. Zeus can control the pace of the match completely and make it look like he is losing rallies when in fact he is taking all the points. 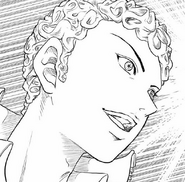 Zeus returns a shot from Tanegashima
Add a photo to this gallery
Retrieved from "https://princeoftennis.fandom.com/wiki/Zeus_Iliopoulos?oldid=57506"
Community content is available under CC-BY-SA unless otherwise noted.