Tsukimitsu Ochi (Japanese: 越知月光, Ochi Tsukimitsu) reached the Nationals while attending Hyoutei Gakuen. He has a taciturn cool personality, but he secretly carries with him the feelings of his comrades.

Ochi is a 3rd Year High Schooler introduced in the New Prince of Tennis Series. He is introduced as the No.9 of the All-Japan Juniors being known as the High School Doubles Specialists along with Doubles partner Mōri Juzaburō. He was the Captain of Hyotei Academy and took them to the Nationals three years prior to the storyline, one year before current Hyotei 3rd years Atobe Keigo, Shishido Ryō, Mukahi Gakuto, Akutagawa Jirō and Oshitari Yūshi began attending their 1st year at Hyotei.

Ochi has a height of 226 cm and is shown to be the tallest player in the series. He has blue coloured hair and the front part of his hair is dyed a different colour to the rest of his hair. His hair completely covers his eyes and he is the first player in the series to have his hair do so. His right eye was shown in New Prince of Tennis Chapter 77, as he was stunned by Zero Shiki Serve which Niō Masaharu used against him.

Ochi is shown to be always be serious not unlike Tezuka Kunimitsu, and is known for trying to break down his opponent's mental fortitude during the game while playing, earning him the nickname The Mental Assassin. He is shown to have a similar arrogance and pride as the rest of the Genius 10 and is mentioned to have leadership skills, as he was shown to be the former Hyotei Captain three years prior to the storyline.

Mizuki Hajime describes him as a person with a calm demeanor, cool judgement and without any shreds of mercy, destroying his opponents mentally the moment he detects a hint of hesitation. He is one of the least talkative players and remains quiet most of the time.

Ochi displays great focus when on the court as while Atobe Keigo tries to murmur to him as he is about to serve, Ochi behaves as if he can't hear what is being said to him and serves an ace at incredible speed. After seeing Tezuka Zone, his first aim was to recognize his and Mouri's positions and devise a strategy as oppose to returning the next shot.

Ochi has great sportsmanship as he complimented Atobe and Niō as a Doubles pair after dramatically losing to them.

Three Years Prior To The Storyline

Ochi is introduced as the No.9 of the All-Japan Juniors and Ochi arrives to the camp with the rest of the First Returning 1st Stringers and the Top 10 who had just came from their Foreign Expedition excluding Tanegashima Shūji who stayed behind at the camp make their way to the main courts to meet the rest of the camp. As Tanegashima joins the rest of the Top 10, the camp recieves the shock news that the ones to return from the Foreign Expedition Group Challenges are Middle schoolers, which meant No.s 11-19 were defeated by Middle Schoolers as part of a planned revolution. Later on that day he and his Doubles partner No.10 Mōri Juzaburō discuss the current situation at the camp.

The next day, he and Mori enter the court for the start of their match to protect their titles of being the No.9 and No.10 of the All-Japan Juniors. To his surprise, Atobe Keigo and Masaharu Niō reveal themselves to be his opponents, with Niō instantly using his Illusion to imitate Tezuka Kunimitsu.

The match begins with Ochi's serve being unreturnable except on occasions by Atobe. The match becomes long and exhausting for the 2nd stringers, however they are still able to catch up to the 1st stringers. When the 1st stringers are leading 5-4, Nio transforms into Kabaji and takes the next two games reaching 6-5. Ochi uses his Mental Pressure abilities and after the change over, showing why is he is called the Mental Assassin, Atobe ends up double faulting for a whole game.

The match goes into tie-break with Ochi and Mouri not exerting much energy and looking relatively calm whilst Atobe and Niō are in deep struggle despite it only being the first set. Eventually, Ochi and Mouri get the deciding point to end the tie-break however Kabaji Munehiro emerges from the audience to return the shot for Atobe/Niō. Due to these rash actions, Kabaji is kicked out of the U-17 Camp. Ochi however for unkown reasons tells the staff to allow the illegal point to count. Niō become Tezuka again and constantly hits Tezuka Phantoms, disregarding his own arm. This proves costly as eventually Niō becomes barely able to stand but insists to go on despite Atobe's worries. Niō then becomes Echizen Ryoma and hits a Twist Serve which Ochi effortlessly returns before Niō suddenly collapses. Atobe/Niō then win the first tie-break.

Ochi and Mouri however begin the second set at full rhythm. Instantly winning the second set 6-0 with total ease against a collapsed Niō and an exhausted Atobe, showing their efficiency.

In the final set, Niō eventually requests to be dragged to the front of the net and becomes Atobe this time. By becoming Atobe, he is able to use Synchro with Atobe. After using Synchro, Atobe/Niō pair are able to fight back with Atobe doing all the playing while Niō lays on the ground. Despite these unorthodox methods, Atobe/Niō pair catch up and the score reaches 6-5 to the first string. With Ochi's remaining a serve that is unable to be returned except the odd few times by Atobe.

Atobe/Niō eventually win the third set 7-6, with an exhausted Niō at the net recovering just enough to put in the final ball that Atobe was unable to reach beyond the net. Atobe replaces Ochi as No.9.

He is re-instated as the No.9 All Japanese Representative since Atobe was made the No.1 Middle School representative.

Prior to the U-17 World Cup

Ochi along with the High School and Middle School First String went to the beach with the head coach. He tasks the tennis players to pick up girls. Those who failed had to try Mitsuya's Inui-Juice filled Rice Balls. Ochi managed to pick up a girl (by glaring at her), therefore avoiding Mitsuya's deadly riceballs.

While the other high schoolers and middle schoolers were either failing or passing, Ochi is seen playing (netless) volleyball with the girl he picked up.

He and Oshi partner up to play the first doubles match against Greece. Heracles serves first and hits an ace against Oishi. Oishi seems to be completely outclassed, not even his Moon Volley is working (they just smash it back). Greek takes a 1-0 lead.

Ochi is a counterpuncher that is known to use his incredible height to his advantage and also try to break his opponents mental fortitude during the course of the match, earning him the nickname The Mental Assassin. His height and the length of his arms and racquet allows for 100% accurate serves requiring minimum movement. His calm demeanor and cool judgment is utilized to destroy the opponent's mentality if he detects any hints of hesitation from the opponent, and due to these personality traits, a single glare from Ochi would be enough to put even more mental and emotional pressure to the opponent, especially at critical moments. He is known as a Doubles Specialist along with his partner Mori.

Speed - 6: With his great height he has an exceptionally long stride. He can use his efficient footwork to instantly move under the ball.

Power - 4: The weapon that is his height makes the power of his smashes and serves terrifying. However he still needs to build up his only moderate muscle strength.

Stamina - 4: In terms of Stamnia, he falls behind a bit the rest of the 1st String. His weakness is that in the latter half of a match his movements become tired and slow. He urgently needs to strengthen his stamina.

Mental - 7: He is called the Mental Assassin. With just one glare he can amplify the pressure on the opponent.

Technique - 4: He has an incredibly high speed serve and can hit the ball very cleanly. He has high skill.

Kurobe Memo: He has a 1 hit sure kill serve. He has just high enough abilities to be a singles player. However, in the match against Atobe and Niou, he showed just how strong his unshakeable will power was. With one glare not even an animal will come near him. He seems a bit lonesome as a result.

Both Mouri and Ochi are the best high school doubles specialists in the U-17 Japanese Representative team. They were not always like this. It was just a random pairing made by the coaches.

Despite never speaking to each other until the Group League, they are a fairly well developed doubles team. Even Byodoin comments that Oishi is utilizing Ochi's abilities very well. When Ochi used Mental Pressure against Papadopoulos Evangelos, Ochi told Oishi to keep his eyes closed. When Oishi was hit in the shoulder by Thalatta Heracles, Ochi was concerned.

Showing both his eyes 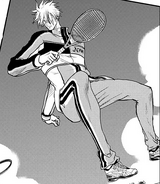 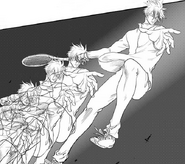 Using his Mental Pressure
Add a photo to this gallery

Retrieved from "https://princeoftennis.fandom.com/wiki/Tsukimitsu_Ochi?oldid=59033"
Community content is available under CC-BY-SA unless otherwise noted.