Heracles is a High School Representative for the Greece U-17. The compassionate hero with many skills. Proud to be a Greek representative. He assaults his opponents in a calm and cool yet bold and daring manner.

Heracles has quite a lot of facial hair.

According to his teammates, he is a kind. However, he has a strong will to win for his country.

Shedding tears for his opponent, this hero is aiming for peace with his tennis! With his gentle nature, he’s the perceptive guy that supports Greece from the shadows. Still wishing to meet a worthy opponent, through this tournament, he truly aspires to become friends with all the different players. He praised Oishi’s Japanese spirit for that sake.

His hugs with his strong arms are filled with love and affection! Clad in silver light, he’s the hero of Olympus!!

Heracles serves first and hits an ace against Oishi. Oishi seems to be completely outclassed, not even his Moon Volley is working (they just smash it back). Greek takes a 1-0 lead.

He eventually loses to Japan and praises them, especially Oishi for his Japanese spirit.

During the Group League Round Robin, he has unveiled his own serve as well as a doubles technique. This prominent Greek power player doesn’t rely on power alone, but can skillfully manipulate the bending slice ‘Apelles’ tail, showing his superb technique.

He wakens his physical ability by using “Silver White light of the Olympus”. Because he doesn’t notice his large build, his body appears to be light. 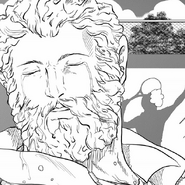 Crying
Add a photo to this gallery
Retrieved from "https://princeoftennis.fandom.com/wiki/Thalatta_Heracles?oldid=57681"
Community content is available under CC-BY-SA unless otherwise noted.