Tanegashima Shūji was first believed to be just another strong 2nd Stringer in the U-17 Training Camp. However, it is revealed that he was a member of the 1st Stringers and is the No.2 of the All-Japan Junior Representatives upon the rest of the Genius 10's arrival. He did not go with the team on their foreign expedition due to his hatred of airplanes.

Tanegashima is a tall, slim young man and has white wavy hair and a notably dark skin tone in comparison to the rest of the camp as he is darker than the players from Kyushu who have been shown to be slightly darker than the rest of the players at the camp. In the anime, Tanegashima is depicted to have purple eyes, but his eyes are brown in the manga.

Tanegashima appears to be a free-willed character who does most things for fun. As shown in his introduction as Tokugawa Kazuya claimed he looked while he was enjoying himself as he was sitting alone watching the middle schoolers defeat several high schoolers.

While calm and pleasant most of the time, Tanegashima likes to troll his teammates, especially Sanada, both on and off the courts. He is also seen frequently riding around in a segway and doesn't seem to train as much as the other players. He is also extremely good at "Look Over There", as he can predict his opponents' movements flawlessly in an instant, while any ordinary player would have relied on guesswork.

Tanegashima also appears to be vigilant and aware of the situation more than others as proven after the long and drawn out Singles match between Irie Kanata and Atobe Keigo when Irie claims he injured his shoulder. Tanegashima saw through this and threw a towel at Irie when he needed it in the changing rooms. Irie used his left arm, showing that he was lying earlier.

He is introduced as a member of the 1st Court watching the middle schoolers defeating their High School opponents and working their way up to the 5th and 6th Courts with Tokugawa Kazuya with the latter claiming that Tanegashima seemed to be enjoying witnessing their rapid progress.

Tanegashima is then later seen during the Team Shuffle between the 5th Court and the 3rd Court, however it is revealed that he was a member of the 1st Stringers and No.2 of the All-Junior Japan Representatives upon the rest of the Top 10's arrival. He did not go with the team on their foreign expedition due to his hatred of airplanes.

However, after finding out the shock news that the No.s 11-20 had been defeated and replaced, and the No.s 11-19 being defeated by Middle Schoolers, which the Top 10 found to be a disgrace, Kimijima Ikuto the No.7 decides to create a rota for the Top 10's matches including the middle schoolers.

Tanegashima shows his childish side afterwards as for his own enjoyment, he decides to steal the drink of a thirsty Kaidoh Kaoru who had been jogging for a long time and need of a rest and a drink. Sanada Genichiro arrives to tell Kaidoh not to worry as his drink was nearby. Unfortunately to Sanada and Kaidoh's dismay, Tanegashima decides to take Sanada's drink also leaving the two Middle Schoolers infuriated with him.

After the Top 10 lose once and win three straight matches against the Middle School challengers, Tanegashima and No.6 Ohmagari Ryuuji prepare to face Sanada Genichiro and Jin Akutsu in a Doubles match. The match kicks off with an extremely fast and heated pace with Sanada bringing out his special attacks and Akutsu going on the attack however the High Schoolers stun them as Tanegashima effortlessly returns all of Sanada's moves and reflects back Rai onto Sanada and bursts his racket gut which startles him, further showing Tanegashima's amazing skill.

Tanegashima then shows his troublesome side as he purposely faults and serves a hard shot directly onto Sanada's bench to knock his water bottle to the ground and then even he agitates Sanada even further by handing his racket over to Ohmagari Ryuuji and sits down whilst Ohmagari handles both Akutsu and Sanada at the same time with Tanegashima sitting casually on the ground no longer playing. However this doesn't last for too long as Sanada reveals he has perfected his Black Aura and forces Tanegashima to rejoin the match. Tanegashima then snatches his racket back from Ohmagari and nullifies Sanada's Black Aura shot all in one play.

Tanegashima and Ohmagari then completely exchange roles as Tanegashima becomes the solo player in what becomes another 2 VS 1 match against Sanada/Akutsu pair. Like how Ohmagari competely dominated the Middle School pair, Tanegashima effortlessly does the same. However, towards the end of the match, Tanegashima and the rest of the camp is stunned when Sanada unveils a "Double Clutch" version of his Black Aura shot meaning the ball completely changes its direction twice at sufficient speed and gets past Tanegashima's amazing reactions. Fortuntately for Tanegashima/Ohmagari pair, it was a fluke and Sanada had yet to master the "Double Clutch" version of his shot. Therefore Tanegashima easily cruised to victory in the end after the sudden scare.

Prior to the U-17 World Cup

Coach Mifune takes the high school and middle school representatives to the beach, presumably in the US, and tasks them all to pick up girls. Shuji cruises along on the segway and picks a girl up, successfully. However, since using the segway is cheating, the segway is confiscated and Shuji actually fails.

While all the other Japanese representatives are in Australia in preparation for the World Cup, Tanegashima is mentioned to be on a ship on his way to Australia.

He is assigned team leader of the team facing Greece. He was scheduled to play in singles 1. However, after seeing Shiraishi freeze up over his opponent, Tanegashima decides to step in. Zeus is shown to be completely dominating Tanegashima, winning 5 straight games. Tanegashima manages to win the next 7 games by adding a bottle cap to the bottom of his racket which makes his shots completely random even to Tanegashima. This prevents Zeus from controling the match's pace any further. Despite winning, he is scolded by Byodoin after it was confirmed Japan has defeated Greece.

On the court, Tanegashima plays a very defensive form of tennis. He is a right-handed player and plays in a unique manner which involves him removing his left arm from inside his jacket whilst the he is still wearing it half zipped causing half of the jacket to hang from behind him awkwardly as he plays. As expected of a player of high rank of being listed the second best in Japan, was capable of easily returning Sanada's Lightning and then Black Aura shot without breaking his racket gut and instead broke Sanada's with it. Oni Juujiro goes as far as to mention that Tanegashima is a man he has never beaten, even though Tanegashima says in return that he also has never won against Oni.

Tanegashima has the godly and natural skill to see the spin placed in a shot and instaneously give this information to his wrists which allows to able to nullify the effect of practically any special shot.

Speed - 5: No matter what kind of ball, he is able to deal with it nimbly and return it. His kinetic vision was forged from rail shooting games.

Power - 5: The secret of his superior muscles lies in the bones. It seems the collagen he gets from consuming pigs feet bestows favorable results to strengthening his bones.

Stamina - 5: Because he is always trying to see through his opponent's abilities while in battle, he seldom gets his pace disturbed. He almost never has to worry about his stamina depleting in the middle of a match.

Mental - 7: Because he is the kind of person who does things just to amuse himself, he can change even a pinch into a chance. Because flexibility supports his foundation, whether it be enemy or ally, he has the acumen to see through and surpass them.

Technique - 6: With the skills to hit a can into the trashcan behind himself without even looking, he has a shining level of control.

Kurobe Memo: He has natural incredible perception and a large field of vision which he uses to see through one's weaknesses. Because he's always riding his Segway around, he has become accustomed to seeing things that move at incredible speeds. However, his one flaw is that he is a very moody person. In real matches, he has a tendency to recklessly show off. 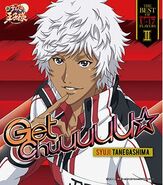 Add a photo to this gallery
Retrieved from "https://princeoftennis.fandom.com/wiki/Sh%C5%ABji_Tanegashima?oldid=58427"
Community content is available under CC-BY-SA unless otherwise noted.