Evangelus is a Middle School Representative for the Greek U-17. An aloof but powerful player who carries the burden of leading the next generation. He's definitely got a pottymouth, but it actually shows just how hard he tries at the game. A single glare from Ochi sent him quivering, suggesting that he has many mental weaknesses.

He is a young clean shaven Greek player.

Throughout the match against Oishi and Ochi, he displays a playful side, sticking his tongue out a few times. He doesn't talk much during the match.

Heracles serves first and hits an ace against Oishi. In general Oishi seems to be completely outclassed, not even his Moon Volley is working (they just smash it back). Greek takes a 1-0 lead.

Heracles ends up injuring Oishi while Evangelus becomes a victim of Ochi's Mental Pressure. Because he loses his service game, Japan wins his service game. He and Heracles ultimately lose against Japan 5-7.

Since the match was focused more on Ochi and Heracles, he did not display many techniques. However, he did display some acrobatic skills.

It has been suggested by a small description that his weakness is mental. A single glare from Ochi was enough to frighten him.

According to Official Fanbook Volume 23.5, he is an right-handed all-rounder. 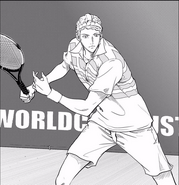 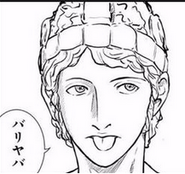 Sticking his tongue out 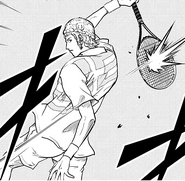 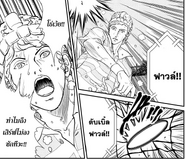 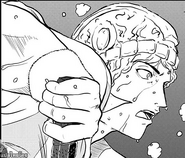 Add a photo to this gallery
Retrieved from "https://princeoftennis.fandom.com/wiki/Papadopoulos_Evangelos?oldid=57600"
Community content is available under CC-BY-SA unless otherwise noted.