Kazuya Tokugawa (徳川カズヤ, Tokugawa Kazuya) is a High School 2nd year participating in the U-17 camp. One year ago, he was beaten by Byoudouin in a match that crushed his pride. He later clawed his way back up the ranks and trained with Oni Juujiro and Irie Kanata in order to exact revenge. Even though he's quite taciturn, he is unexpectedly quite caring of his upperclassmen.

Introduced as a new rival in the sequel series to Prince of Tennis called New Prince of Tennis. He seems to possess the same effect on people as Yukimura as mentioned by Kirihara Akaya as he froze Kirihara just by glaring at him (in the anime it was Echizen who is frozen). He was shown to be able to return five tennis balls at one time as practice with relative ease. He is portrayed as an intimidating person and he belongs to the first court, which means he is one of the strongest second-stringers.

He was defeated at the camp last year by Byōdōin Hōō and restlessly aims to exact revenge against him. He along with Irie Kanata, Oni Jūjiro and Tanegashima Shūji are the four High Schoolers who are far stronger than 2nd Stringer level and the rest of the 2nd Stringer High Schoolers despite being introduced as 2nd Stringers. It is revealed that the latter two were in fact Top 10 members who chose to stay behind and that Irie chose to not become a 1st Stringer and stay behind to strengthen the camp.

Echizen Ryoma challenges him at the beginning of camp instead of playing his arranged match against a fellow middle schooler) and loses dramatically. Tokugawa advises him to go train with the Drunken Coach.

In an extended flashback in The Night Before the Decisive Battle, a young Tokugawa (perhaps his 5 year old self) is seen training. He is also seen winning a tennis tournament in France. He is eventually invited to Japan's U-17 tennis camp where is suffers his first ever defeat.

Tokugawa is very tall like the majority of the High Schoolers. He has very dark blue hair and has a parting on the right side that covers part of his left eye. He is shown to be quite slim, and his eyes are brown (grayish blue in the anime). He has only been seen with a serious facial expression. He only managed two small smiles.

Tokugawa has a very tunneled vision when it comes to rivals up until Echizen Ryoma arrived as he recognized Ryoma's abilities the first time they played. His tunneled vision is aimed at Byoudouin Houou. As the latter effortlessly defeated him last year as Tokugawa entered the U-17 Camp. Tokugawa practices Aerobics everynight in one of the halls of the camp and even showed the excellent level of balance as to be able to balance his whole body upside down on just three fingers.

Tokugawa like Tezuka, rarely shows any sort of emotions in his facial expressions and Tokugawa is yet to be seen smiling. Tokugawa's main reason for training so hard is to defeat Byoudouin as he tells Ryoma as the two of them practice that Byoudouin is person he wants to defeat even if he dies.

He is shown to be somewhat close to Oni Juujiro as the latter gives him encouragement after Byoudouin taunts him upon his return from his Foreign Expedition.

In the manga, when Ryoma returns from the mountains, Tokugawa begins to open up to Ryoma during their rally, before Byoudouin disturbs it. This can be seen as a repeat relationship of Tezuka and Ryoma.

He is first shown in action when effortlessly rallying with 5 balls with Oni Juujiro. His skill is evident as he was able to ovewhelm Echizen Ryoma upon the latters arrival at the camp and is the No.1 2nd Stringer within the camp according to the list shown just before the 1st Stringers arrive.

Tokugawa is a left-handed player as well as an All Rounder. His known techniques are as follows:

Speed - 4.5: He has a high level of kinetic vision and as such, has a fast reaction speed to the ball. From now on, he needs further leg strength training.

Power - 4.5: If he would have one part to develop, it would be his leg strength. If he would like to be able to use even higher level techniques, he requires strengthening of his griping power.

Stamina - 4.5: Compared to last year, his stamina has increased considerably. In addition to the normal camp training menu, every morning and evening he diligently does endurance training in his own free time. All that's left is learning to implement better pacing into his training.

Mental - 4.5: He has a strong force of will. However, after suffering a humiliating defeat from Byoudouin, if he was left with some cowering feelings from that, it can probably be fatal.

Technique - 4.5: Being able to hit 10 balls at once is indicative of his extraordinary ball control. He is the type to have good balance.

Kurobe Memo: After suffering a major setback, to be able to easily hit 10 balls at once shows his rapid growth. The biggest question at hand right now is if he took severe damage when Byoudouin launched an attack at his abdomen.

Ryoma and Kazuya seem to share a rivalry similar to what Ryoma and Tezuka have during their time in Seigaku. Kazuya seems to make Ryoma aim higher than his current skill level. Kazuya takes on the role of Ryoma's mentor at the U-17 camp. It was stated in the New Prince of Tennis Fanbook 10.5 that Tokugawa had always wanted a younger brother and therefore took a liking to Ryoma. However, since his favorite Ryoma became more attentive to Echizen Ryoga, a burning sense of rivalry with Ryoga had developed.

Since Tokugawa's first year at the camp, he has been on good terms with the two of them. They both decided to stay back at the camp, not only to strengthen the camp, but to train Tokugawa to help him defeat Byodoin. In return for their training, Tokuagwa has promised to become No.1 of the All Japan Representatives.

Byodoin was the first person to defeat Kazuya in an official tennis match by violent methods effortlessly. Tokugawa has trained relentlessly to defeat him for all the injuries he has sustained.

After almost defeating Byodoin during their re-match (G-10 matches), Byodoin begins to compliment and acknowledge Tokugawa's strength. Desite not being able to defeat Byodoin, Tokugawa succeeded in something Byodoin couldn't succeed in, picking up girls. This earned him an semi-kind compliment from Byodoin.

Yukimura and Tokugawa never spoke to each other until the Pre-World Cup Exhibition Match. Despite this, when Yukimura was yipped during the match, Tokugawa kept using Black Hole to protect Yukimura, playing the entire match himself and risking his own lifespan. 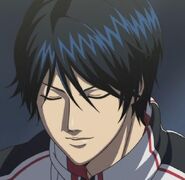 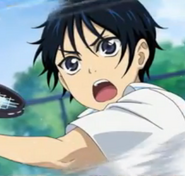 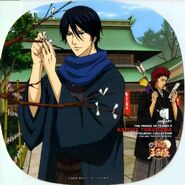 Add a photo to this gallery

Retrieved from "https://princeoftennis.fandom.com/wiki/Kazuya_Tokugawa?oldid=57631"
Community content is available under CC-BY-SA unless otherwise noted.