Japan and Germany had an exhibition match against each other. The matches started in Golden Age 140: The Pre-World Cup Opens!! and concludes in Golden Age 170: Pride of an All Japan Representative.

The next match between the two countries are during the Semi-Finals of the U-17 World Cup. 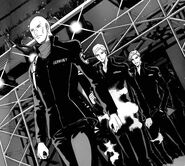 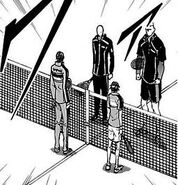 3rd Doubles
Add a photo to this gallery
Retrieved from "https://princeoftennis.fandom.com/wiki/Japan_vs_Germany?oldid=59261"
Community content is available under CC-BY-SA unless otherwise noted.