Prince of Tennis Wiki
Register
Don't have an account?
Sign In
Advertisement
in: Schools, Tokyo Schools, Middle Schools,
and 8 more 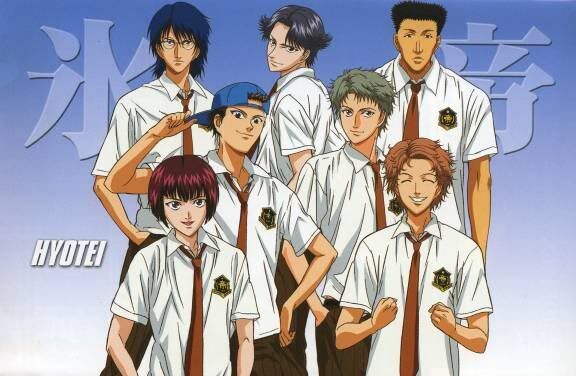 Hyotei Academy (氷帝学園) is a private school located in the Tokyo prefecture. It's tennis team, Hyōtei Academy Secondary Department (氷帝学園中等部 Hyōtei Gakuen Chūtō Bu)  applies a strict stratification and merit system, which prioritizes ability only rather than emotion. If any regular loses a match, they are removed from their spot and only given a second chance in very rare conditions. The Hyōtei Tennis Club has over two hundred members. The team itself consists of eight regulars led by Atobe Keigo.

Students at Hyotei can choose their own subjects. Subjects are divided into two categories “specialized” and “generalist”. Hyoutei’s curriculum also offers a lot of elective courses that can be taken starting their second year. The elective courses include: music, art, calligraphy, foreign languages and computer science.

Students of Hyotei Gakuen can experience an exchange program with its four (4) sister schools around the world to give the students a better understanding of a multi-cultural society. Students are also obligated to take public transportation means when going to and from school however, in the presence of a guardian or parent, a private transportation method can be arranged.

It should be known that Atobe was the strongest in the club since his freshman year. He was also pleaded by the original tennis club's captain to be the new captain as revealed in fanbook 40.5.

Contrary to the manga, in the Another Story OVA both Oshitari and Atobe were the strongest in the club since their freshman year despite Akutagawa Jirou being stated to be the school's second strongest player.

They suffer setbacks early in the story. They are first defeated by Fudomine during the Prefectural Tournament, having arrogantly sent 4 non-regulars to the matches, losing both doubles games as a result. After regular Shishido is crushed in 15 minutes by Tachibana in Singles 3, Fudomine advances to the semi-finals, and Hyotei crashes out. A full strength Hyotei then crush St.Rudolph in the 5th place consolation match, snatching the last spot to the Kanto Regional Tournament.

As a non-seed, Hyotei is drawn to face old rivals Seigaku in the first round of the Regionals, and loses, leaving them ineligible for the Nationals (with only the top four teams in tournament qualifying). They are all depressed until they receive a special invite due to Tokyo being chosen as the host city, and hence getting to invite one extra team. At the nationals they crush their first two opponents, including their second round opponent Shishigaku, Semi-finalists from the previous year. Having lost their top two players, Tachibana (to Fudomine ) and Chitose (to Shitenhōji ), Shishigaku stood no chance against a full strength Hyotei. At the Quarter-finals, Hyotei once again clashes with Seigaku, and after 5 hard and evenly fought matches, ultimately lose, ending their run in the Nationals.

After the Nationals, all 8 Hyotei regulars are invited to the U-17 Camp, a place where only High Schoolers had been invited to prior to this year.

The Hyotei girls tennis uniform mixed in with the other schools

Community content is available under CC-BY-SA unless otherwise noted.
Advertisement