Akaya Kirihara (Japanese: 切原赤也, Kirihara Akaya) is the youngest and only second year student in the Rikkai Dai line-up, thus earning him the title "Second Year Ace" (sometimes known as "Junior Ace"). He joined Rikkai because he heard the school had a very strong tennis team and wanted to be Japan's number one, but his hopes were quickly crushed by Rikkai's Three Monsters (Yukimura, Sanada, and Renji.)

Kirihara has messy short black hair that comes down to just over his forehead and has green eyes. Because of this he is often given the nickname "Seaweed Head". His height is in between that of Yukimura's and Marui's.

Kirihara first appears when he accidentally arrives at Seigaku and causes trouble after oversleeping on his ride to a tournament; he looks childish, friendly - and no where near as cruel as he acts when he is in Bloodshot Mode or Devil Mode.

Overall he tends to act cocky and over-confident towards other players unless he specifically respects them- though that does not always stop him from joking about them either to their face or behind their backs.

When Kirihara is under hard pressure or his pride is being injured, he becomes extremely furious and 'devilish', as depicted with blood red eyes. He then unleashes a brutal assault on the opponent's body. He uses this technique on Tachibana and later on Fuji Shūsuke. However, this technique is completely ineffective against Kirihara's vice-captain, Sanada Genichirō, because of Sanada's incredible reflexes; Sanada himself says that if Kirihara trained for ten more years, perhaps he would have a chance against him.

Kirihara always expects the best from himself and hates losing. Three years ago, he heard that Rikkai Dai had won the last year's national championship and had an incredibly strong team, so he entered the school with the ambition to be the best. But as he says himself, My ambition was quickly crushed by the "Sannin Bakemono" (three monsters)! After that, Kirihara's new ambition became to defeat the "monsters" (Rikkai Dai's captain, Yukimura Seiichi, Sanada Genichirō and Yanagi Renji), and he became a regular on Rikkai Dai's tennis team following these events.

He is rude and harsh when he plays tennis, but he is actually nice when he is not playing tennis. This could indicate that he suffers from a mild form of a Dissociative Disorder.

Kirihara is one of the more light-hearted members on the Rikkai Dai team, and their only second year regular. This has led to his nickname of "Junior Ace" by the rest of the team; it can also be inferred that he is considered the 'baby' of the team by the other Regulars.

He is addressed/referred to only as 'Akaya' by them (in the manga: usage of the given name without a suffix in Japan could be said to infer either closeness, affection, or simply being comfortable with the person being addressed), although Yagyū - polite even when addressing his teammates- seems to call him 'Kirihara-kun'; Jackal is assigned to 'look after' him, as it were, and they generally treat him lightly and are concerned for his growth and well being.

They are stern when necessary, however: they all admonished him for his loss against Ryoma in the manga , and Yanagi and Sanada have both hit him (Yanagi perhaps lightly, Sanada for his going against their promise to Yukimura by losing and stepping out of line by having an unofficial match). He could be said to get along with all of his teammates, therefore, to varying degrees; out of the Three Demons, he could be said to get along best with Yanagi.

After a rather rough start, they develop a bittersweet companionship. After Yanagi loses his match with Inui Sadaharu in the Kantō Tournament, he protects him from Sanada's admonishing hit using his racquet. He seems to hold the same friendliness with Yukimura, the Captain, as the rest of the team all do; whilst he seems to find Sanada rather stern and harsh, he respects Sanada - and Sanada, in turn, seems to be supportive of him, albeit not often expressing it (yelling out for Kirihara to win for Rikkai with his own hands during his match with Fuji).

He is not shown to have relationships with many others outside of his own team: however, he could be said to hold an interest in strong players in general, especially Tezuka Kunimitsu of Seigaku (and, to an extent, Echizen Ryoma of the same school). He also seems to have a good relationship with Shiraishi after their doubles match at the U-17 camp, since Shiraishi promised Yanagi to watch over Kirihara and keep his devil mode in check.

It has been noted in the series that Kirihara plays the strongest players from each school. It has also been noted that by playing against the strongest, he will become the strongest - perhaps one day strong enough to defeat his Captain Yukimura, Vice-Captain Sanada, and Yanagi.

Much as Hiyoshi Wakashi has been cited to be the most likely Regular to become the next Captain of the Hyōtei team (and confirmed in the U-17 arc), it can be assumed that Kirihara will be the next Captain of the Rikkai Dai team once the other Regulars - all third-years - graduate. He is directed to sit on as the bench coach (Rikkai does not have a visible coach, and it can be assumed that Sanada takes that position on the team) by Sanada after his match with Fuji, and it is a logical assumption to make that he will be the only remaining Regular on the team next year.

When Kirihara just joined Rikkai as a first year, he did not have respect for Yukimura, Sanada or Yanagi due to his ideology that he was number one. But after suffering a heavy loss to the three, he shows respect towards them. During Yukimura's stay in the hospital Kirihara deeply worries for his captain like the rest of the team. He appears to look up to Yukimura like a mentor.

When Kirihara just joined Rikkai as a first year, he did not have respect for Yukimura, Sanada or Yanagi due to his idealogy that he was number one. But after suffering a heavy loss to the three, he shows respect towards them. Sanada seems to be harshest with Kirihara and is grooming him to be the next captain. He punishes Kirihara severely at times to make him learn. Kirihara gets annoyed at times, though he still respects the vice captain.

Out of the three demons, Kirihara has the closest relationship with Yanagi. Yanagi seems deeply concerned about the lowerclassman's development in tennis and personality. To help him improve his tennis and groom himself to be the next captain, Yanagi forfeits their match in the U-17 camp even though he was beating Kirihara effortlessly.

Kirihara often falls for Niō's tricks. Jackal is one of Kirihara's closest friends as he, Kirihara and Marui often go to the arcade. Not much is known about his relationship with Yagyū

Shiraishi becomes Kirihara's mentor in the U-17 camp and he teaches Kirihara how to be patient. 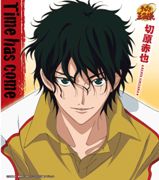 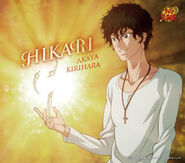 Hikari character song
Add a photo to this gallery
Retrieved from "https://princeoftennis.fandom.com/wiki/Akaya_Kirihara?oldid=57511"
Community content is available under CC-BY-SA unless otherwise noted.